Drystill has invented and patented internationally a heat and mass exchange device called a SAM (an acronym for Stripper/Absorption Module). This device implements a revolutionary separation technique called “Pass-through Distillation” (PTD), a public domain concept that is being studied in universities around the world. PTD does not necessarily require a Drystill SAM in order to work. But in order to understand what a SAM does, it is necessary to first understand PTD. The best way to learn about it is to visit the website dedicated to disseminating information about it, PTdistil.com. It shows, through text and videos, how PTD brings about room temperature distillation using less than half the energy required by ordinary single effect distillation. 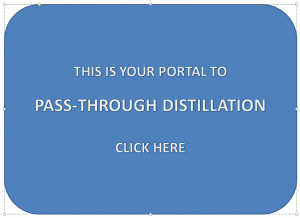 The website www.PTDistil.com is an educational website dedicated to the free dissemination about pass-through distillation, which is a public domain concept. The Drystill SAM, on the other hand, is a proprietary device. You may click on the image below to watch a brief video that shows how PTD technology and SAM technology connect. “SAM” is to “PTD” as “jet engine” is to “airplane”. Although airplanes may be propelled by other means, jet engines have made possible the air transportation industry as we know it today. 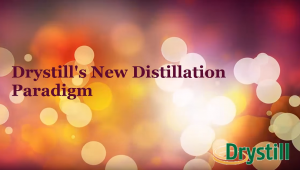 The video above introduces the idea of a SAM. It is an evaporator and gas absorber in a single low pressure vessel with heat pipes passing through the bulkhead that separates them. The evaporator generates vapours that are ducted into the gas absorber and absorbed into a stream of absorbent fluid.  Gas absorption generates heat and absorption uses heat.  Roughly the same quantity of heat is involved by each process – the latent heat of evaporation.

Some absorbent fluids operate at temperatures much higher than liquid being boiled in the evaporator. As an example, if the evaporator feed is a fermentation broth (which is mostly water), it will boil at 30 degrees Celsius at 0.04 bar. At that pressure a 55% Lithium Bromide brine will absorb water at a  temperature of 60 degrees Celsius. Heat pipes conduct heat from the hot absorber to the relatively cooler evaporator. Under the right conditions the heat demanded by the evaporator is exactly matched to that which the absorber must waste, and the SAM will operate with no externally applied heating or cooling.

In that process the absorbent fluid becomes diluted. In order to recycle the absorbent fluid in a continuous circuit, the diluted brine must be regenerated to its original concentrated state. This involves boiling out of it everything it absorbed during its transit through the SAM absorber chamber. Since the brine contains no temperature sensitive substances, the high temperatures associated with multiple effect distillation (MED) are acceptable. The brine may then be regenerated using less than half the energy that was originally delivered by the heat pipes into the SAM evaporator.

Those are the basics. The details are even more fascinating. In fact, they constitute a body of knowledge of their own right, playfully called SAMology.

Pass-through Distillation involves an evaporator, a gas absorber, and an absorption fluid regenerator arranged as shown in Figure 1. 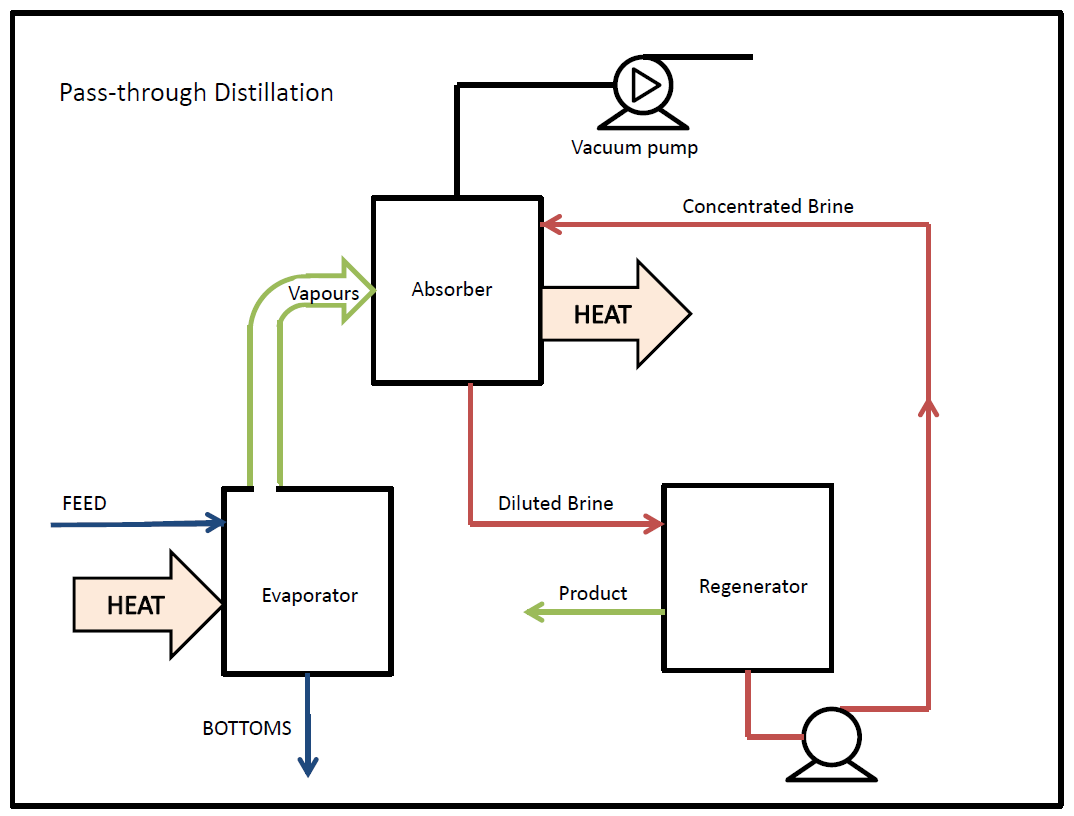 The heat required by the Evaporator is roughly equal in magnitude to that generated and thrown off by the Absorber. The temperatures within the absorber are higher than those in the evaporator. This offers the opportunity of thermal integration as shown in Figure 2. 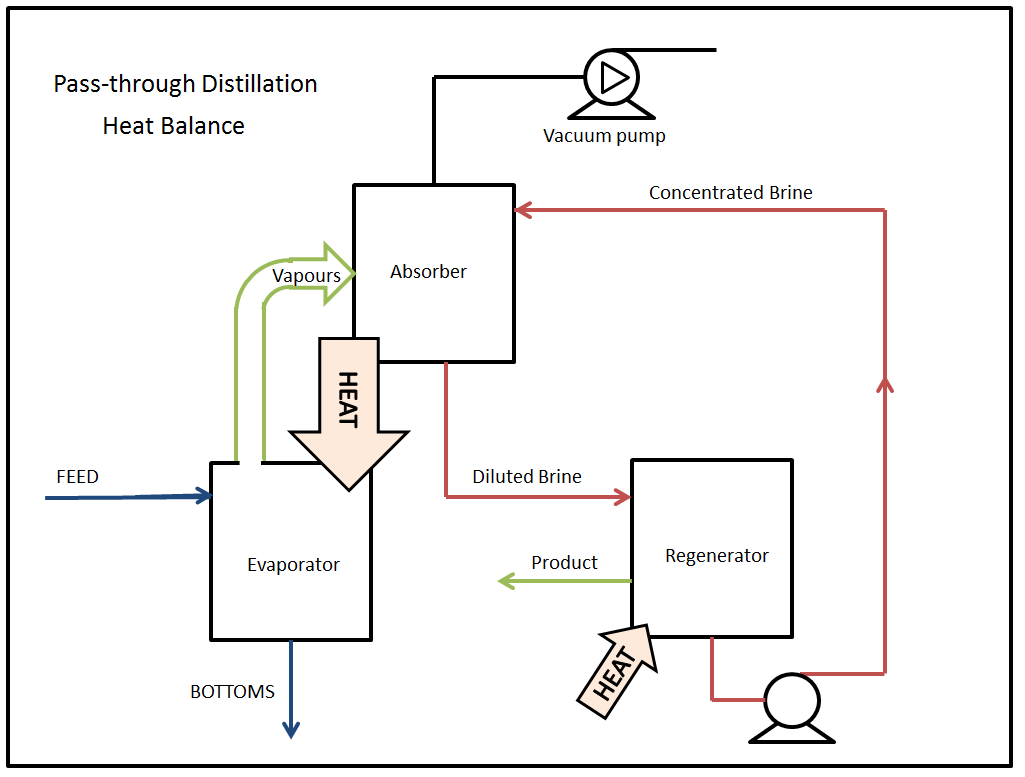 Drystill has combined the evaporator and absorber into a single vessel with means of conveying the heat from one to the other, as shown in Figure 3. 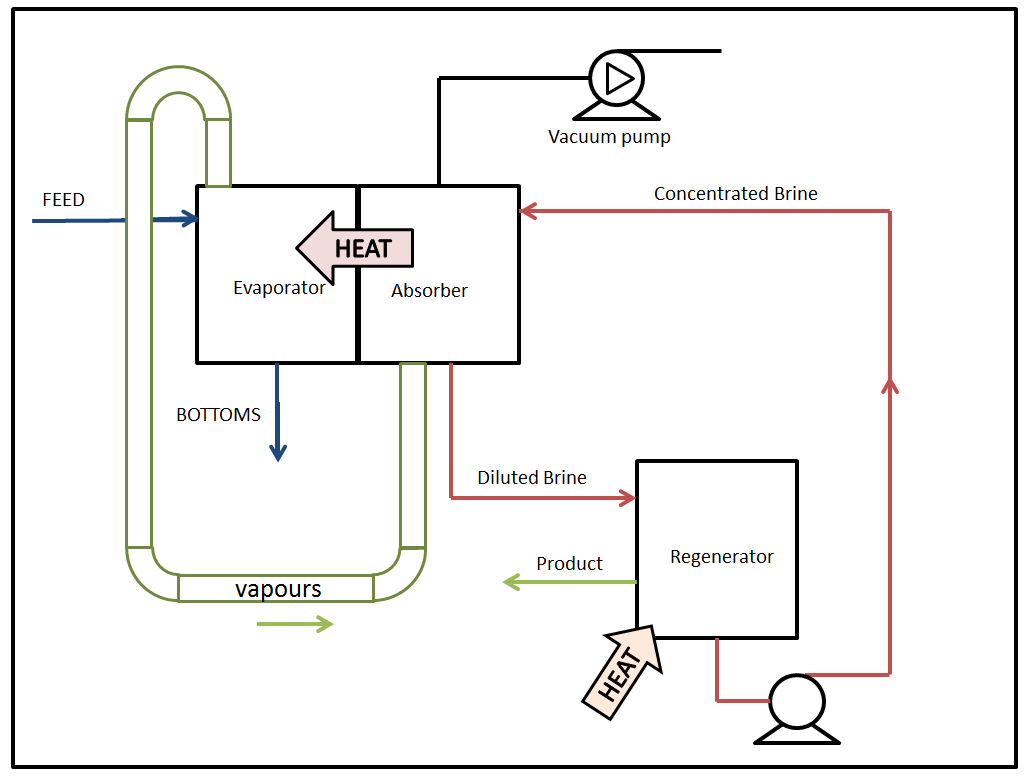 The ducting of the vapours from the top of the Evaporator to the bottom of the Absorber may be done internally, as shown in Figure 4. The evaporator/absorber unit is called a SAM, and the process that combines it with a brine regenerator is called TIEGA (Thermally Integrated Evaporation and Gas Absorption). 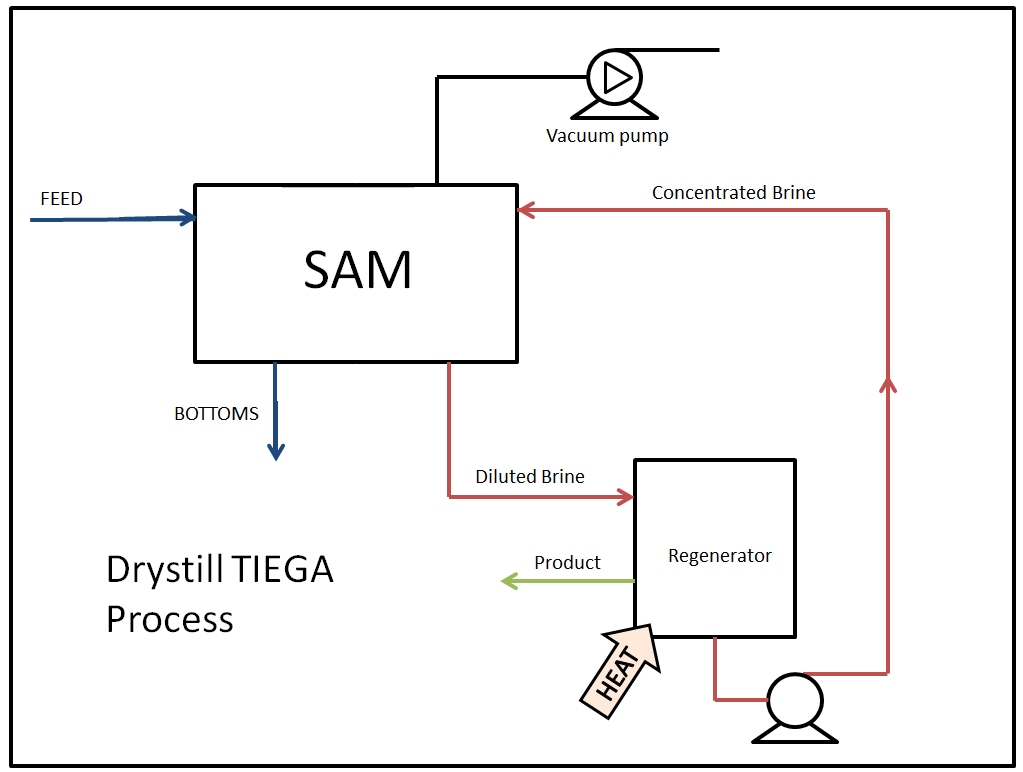 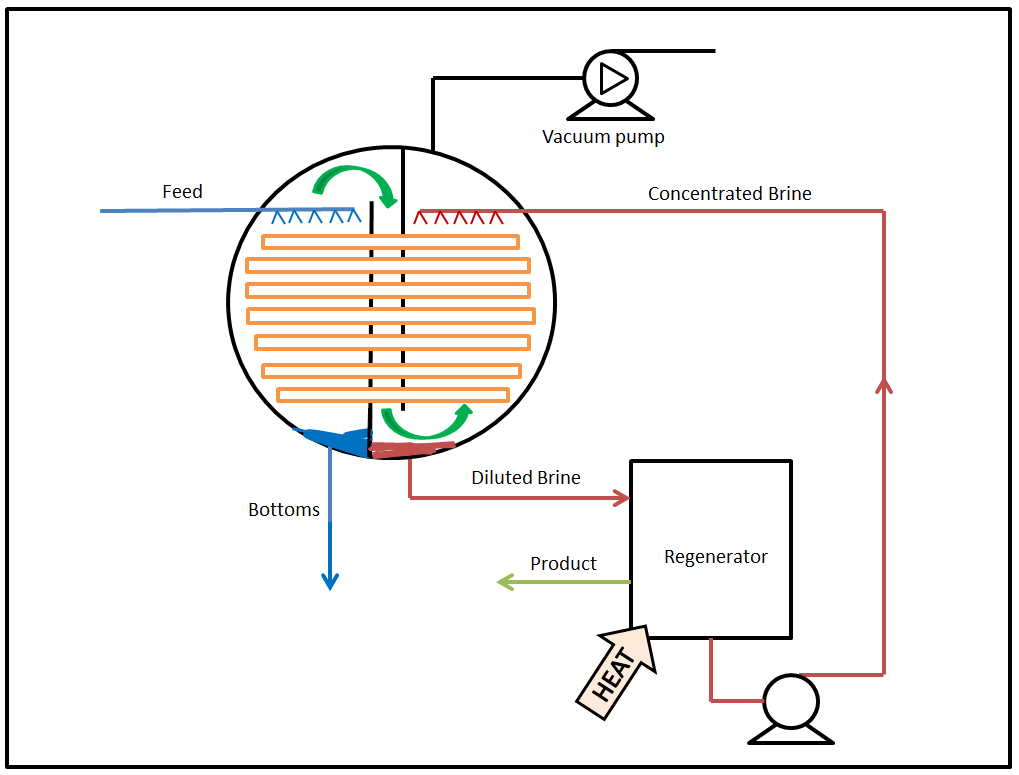 The SAM shown in Figure 5 is intended to convey the idea of how a SAM works, and to serve as a schematic representation on process flow diagrams. But a working SAM could be fashioned according to this basic geometry.If the heat pipes and the double bulkhead were made as a sub-assembly and loaded into a vacuum vessel with appropriate sealing means, it might look like this: 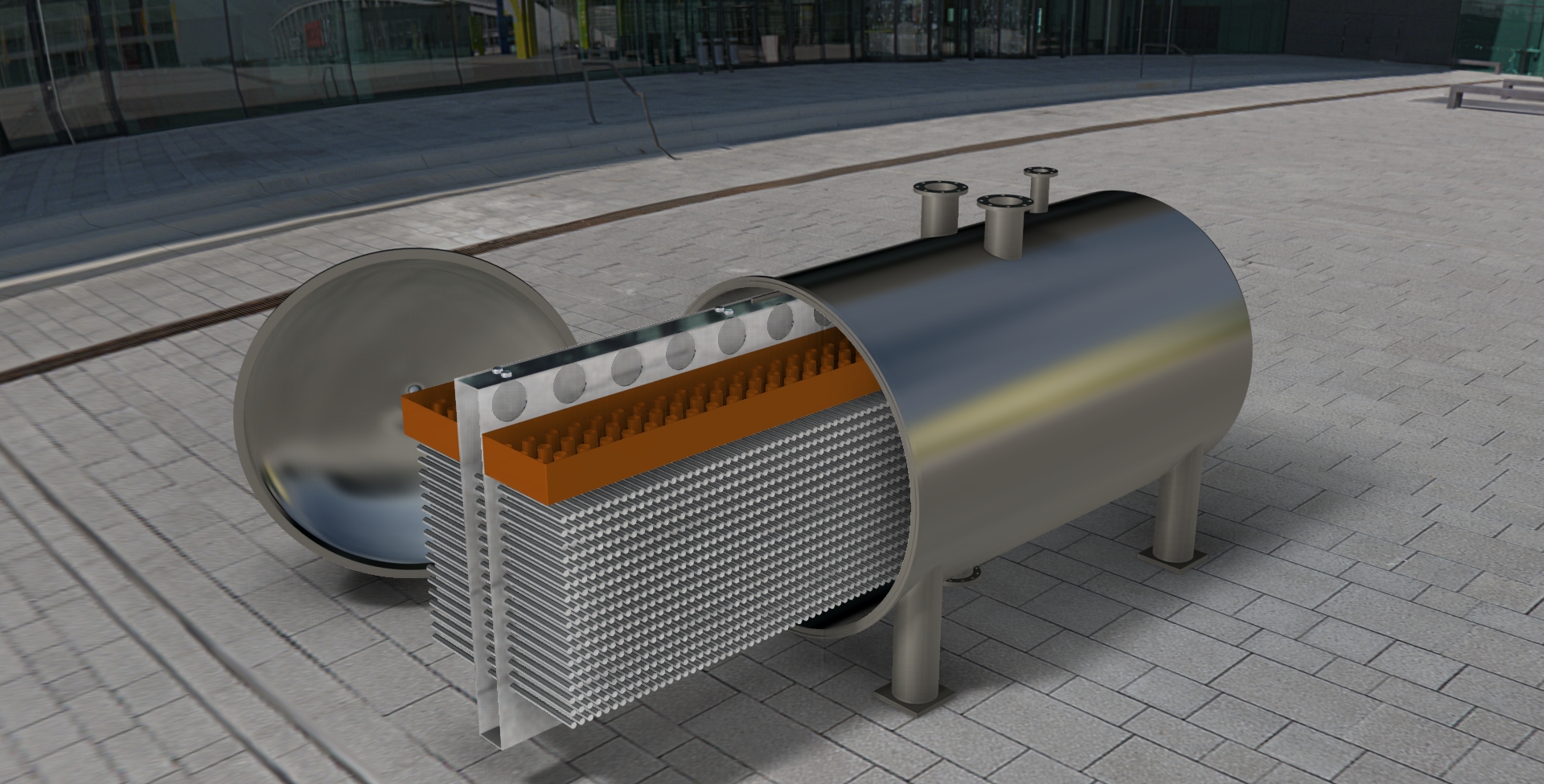 Figure 6 shows a dual bulkhead SAM with transverse heat pipes. The bundle is self-contained and may be pulled out of the shell (as shown here) for cleaning or inspection without the need to disconnect any piping. Click here to see a video of this taking place.

While simple in function, SAMs involve complex relationships between fluid flows and geometry. The heat pipes serve as coarse packing in both chambers, so there is capability to separate not only solids from liquids but to concentrate the most volatile species in the vapour stream leaving the evaporator.  Tall SAMs seek to take full advantage of this. They are constructed to give many vertically stacked rows of heat pipes. Drystill’s Pilot plant at Fielding Chemical was an example of a Tall SAM. A drawback of Tall SAMs is that they require a crane to pull the heat pipe bundle. This might be acceptable for service with clean fluids but bad if there is a need for routine cleaning.

For dirty service, Long SAMs are preferable. Fig 6 above is an example of a Long SAM. The bundle can be pulled, cleaned and put back into service in under an hour.