By ianmcgregor on February 24, 2017 in Uncategorized 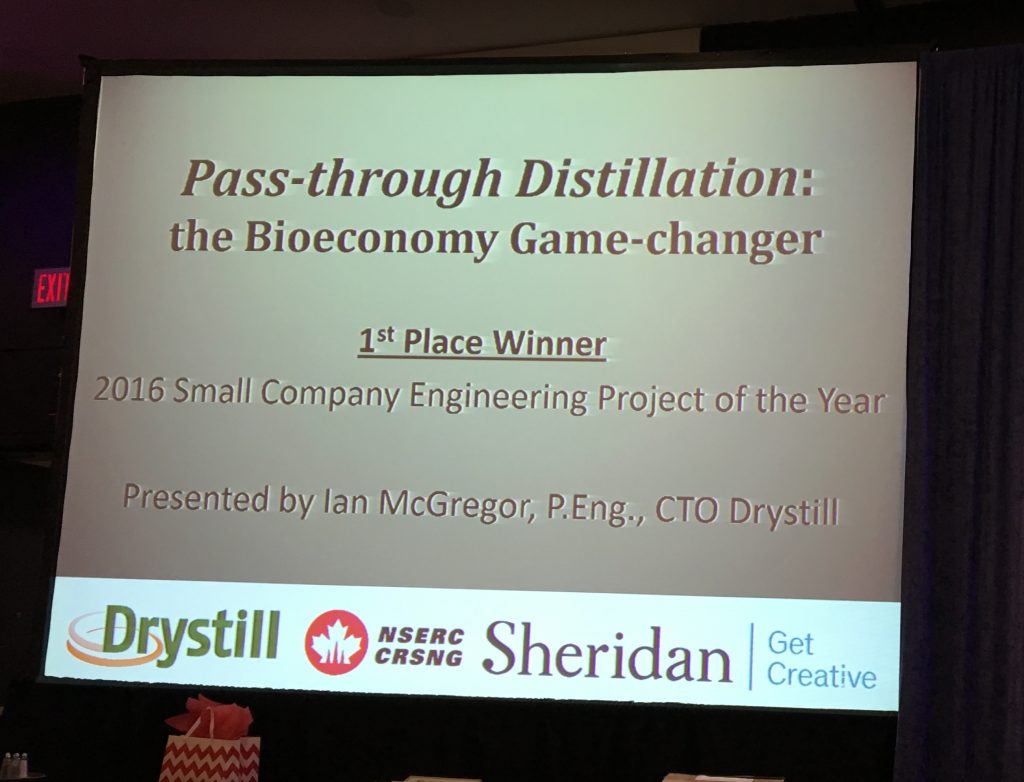 Good evening Ladies and Gentlemen. It is a great honour to address you tonight on behalf of Drystill, this year’s project of the year winner in the small company category. I would like to tell you our story. It is a story of how a very small Canadian company is making a big impact on world-scale problems.

Removal of ethanol from watery mixtures, like fermentation broth, is an important industrial activity. Drystill has invented a device it claims can do a better job than conventional equipment. With funding assistance from NSERC, Drystill teamed up with Sheridan College to build and test a bench scale prototype under rigorous academic supervision. The testing validated Drystill’s claims.

That is the project in a nutshell. Although it may not sound remarkable, I think you will be astonished by its significance to the world in general – and to Canada in particular.

The removal of ethanol from watery mixtures is only one of thousands of tasks carried out every day by the process known as distillation.  Although many people associate the term mainly with whiskey and other alcoholic beverages, distillation is in fact an industrial workhorse, touching almost everything we eat, wear and use. It is also a very old technology, used by the early Egyptians to prepare fragrances and medicines. Simplicity is its main virtue: You simply boil a liquid then cool the vapours to turn them back into a liquid. Although mankind has become a lot smarter about the science behind distillation, the same ancient process is still in extensive use all over the world.

Distillation, however, it has two serious drawbacks: Its enormous use of energy is costly both in financial and environmental terms, and its hot operating temperature is troublesome in some important applications.  Drystill, in contrast, champions an alternative process called Pass-through Distillation.  It enables economical low temperature distillation, reducing boiling temperatures down to 30 degrees Celsius while simultaneously reducing energy use by 50%.

The Pass-through distillation process is in the public domain. It is not patentable because it is an obvious combination of well-known scientific principles.  But it has never been implemented industrially for want of a suitable heat and mass transfer device with which to carry it out. Drystill has met that need with its invention of the SAM: an acronym for Stripper/Absorption Module. The SAM has patents granted or pending internationally.

In industrial settings, distillation is not powered by renewable sources like wind or solar energy.  It is powered by steam, generated by burning fossil fuels in a steam boiler. This means that where pass-through distillation displaces conventional distillation, the same results are achieved by burning half the fuel.

The signing of the Paris Agreement last April marks the beginning of world-wide deliberate action against Global Warming.  Each signatory country, including Canada, has pledged to cut back on the combustion of fuels to halt the progressive build-up of carbon dioxide in the atmosphere. No single measure will accomplish it. Some measures will be easy to bear – but others will be very painful. It will be painful to curtail our vacation travelling. It will be painful to have to cut back the thermostats of our domestic furnaces. But if manufacturers were to replace their conventional distillation equipment with Drystill equipment, the only pain would be its capital cost. That pain however would be offset by a fast payback due to reduced fuel costs. Government incentives could make that payback very rapid indeed. Once the investment has paid for itself, it will continue to save fuel costs for years to come.

As countries around the world get serious about living up to their commitment to burn less fuel, this is the kind of measure that is going to be sought. It doesn’t affect anyone in a negative way. It is low hanging fruit in the quest for greenhouse gas reduction.

But can Pass-through distillation be applied widely enough to make a significant impact on the global warming problem?

Many people are surprised to learn just how much of our global energy budget is devoted to distillation. This pie chart, representing data from the US Energy Information Administration shows that 32% of all energy is used by industry. A third of that goes in to distillation! This is a whopping 9% of all energy used in the United States for any purpose. Pass-through distillation can cut that down significantly. It is applicable in many industries including food and beverage, pharmaceuticals, pulp and paper, specialty chemicals, wastewater treatment and others.

It is reasonable therefore to say that Drystill’s technology is an attractive greenhouse gas control measure in the context of the current industrial environment. But industry itself is undergoing enormous changes. While coal, crude oil, and natural gas remain the dominant source of both energy and chemical feedstocks, there is a movement toward renewable sources such as agricultural crops and harvested biomass.  Already in North America 10% of the fuel we burn in our cars is corn ethanol.  Efforts have been underway for at least two decades to make ethanol economically from straw, wood chips, corn cobs and other waste biomass. When that effort finally succeeds, the world’s dependency on fossil fuels for transportation will be broken, and we will be well on our way to defeating the global warming menace permanently.

Unfortunately there remain serious economic problems with the production of cellulosic ethanol. Many studies have shown that low temperature distillation enhances economics by keeping microorganisms alive and preventing destruction of expensive enzymes. Researchers have demonstrated this at lab scale but low temperature distillation through conventional means is not feasible at plant scale. A breakthrough technology is needed, and Drystill believes that pass-through distillation is the answer. The success of the cellulosic ethanol industry and victory over global warming may hinge on one question: Can pass-through distillation remove ethanol from a fermentation broth at a temperature of 30 degrees C?

Here’s a news flash for you:  Drystill and Sheridan College just tested it using a Drystill SAM. IT WORKED .

For the good of our planet, this technology needs to be tested at demonstration plant scale as soon as possible. Since it is a Canadian invention, I am hopeful that a way will be found to do this testing in Canada, and that Canada will reap economic benefits by becoming the purveyor of pass-through distillation technology to biorefineries all over the world.

Thank you for your attention.